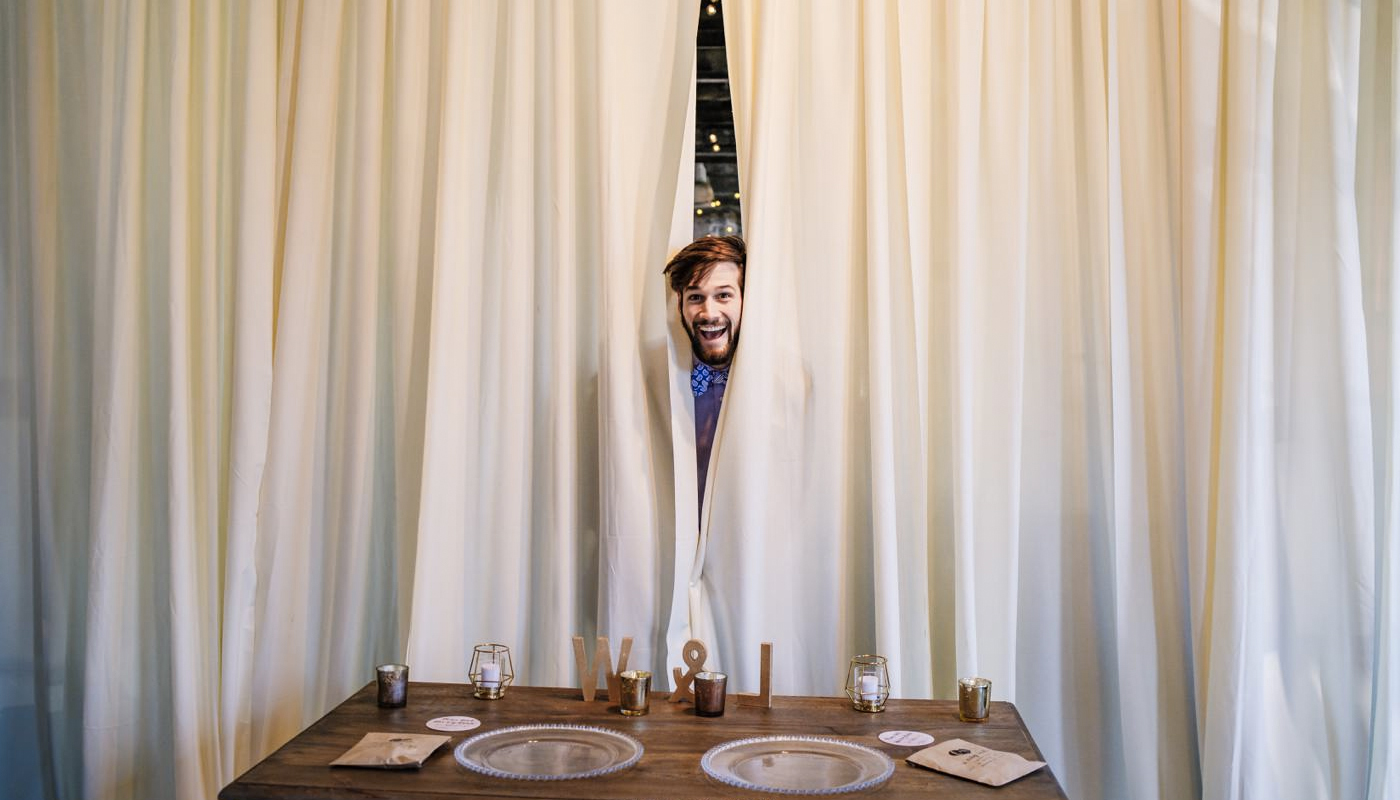 Posted in Photography by Brea, Weddings by Brea 3 Comments

It’s time for our favorite, and most ridiculous post of the year. At each wedding I usually end up with anywhere from 20-40 photos that I mark while culling the thousands of photos we take during the day (not exaggerating) and put into a folder to use for what’s essentially a blooper reel at the end of each year. These photos are anything from lighting tests, to accidental photo bombs, to on purpose photo bombs *ahem* Tommy *ahem*, to photos of us actually working. This year I also included the resulting photo from some of these bts shots!

Not only do we have the best job ever, photographing the most amazing clients – but we also get to do it together with the best work family around.

So here we go… the 2018 installment of our behind the scenes shenanigans.

BEHIND THE SCENES | BALTIMORE WEDDING PHOTOGRAPHERS

This one is just cruel. I was planning on testing my light for a backlit shot of Tracy and Bharath during their engagement session, not realizing that Tommy was holding the flash and it was pointing directly into his face. At full power. Ouch.

That time Olivia came to the rescue and helped us out at a wedding with less than 24 hours notice.

That time we ran into friends who were using the same portrait location for the wedding they were working!

There are a few BTS shots showing the resulting photo in this post – this is the first one :) Tommy gettin’ it!

Behind the scenes of this photo…

When I first saw this photo I was so confused. I thought he was up against the mirror, shooting along it… and then I realized he literally just shot into the mirror. D’oh.

Behind the scenes… ha. ha. *cough*

Sarah is the best! We missed you so much this year!

Early in the year, we had our last wedding with Jean Bean, after five years of being my number one right hand gal. I’ll give you a hint as to why…

This is why we don’t take pictures of you eating during dinner. Thanks, Tommy…

A nice picture of me just to prove they exist.

I love this shot of Tommy booking it out of Katie’s photo from Natalie and Mike’s wedding.

That one time Chris helped us!

Frands! Not only did I run into Alexa and Dan at a wedding this year, but I also got them back in front of my camera for a portrait session :)

Get down, get down.

When one of the guests lets you lean into her lap to get the shot.

Taken my the father of the bride :)

Creeper one and creeper two.

I love Minty watching Tommy, learning from the pros… this is how we pose for lighting tests.

When you know you’re gonna be in the shot, you gotta make it count.

Tommy, you’re not a groomsman, stop it.

Courtney’s first wedding! Where she was promptly turned into a coat rack.

…and scared Jordan by sneaking up on him.

I thought I was modeling light… thanks Tommy.

OMG Brooke. I think she had fun at her first wedding with us lol

I told Tommy he was in my shot, so he moved… to also in my shot.

SO fun seeing Mike and Lauren at Kelly and Shannon’s wedding!

During weddings, Jordan sometimes FaceTimes his wife Rachel. They can’t hear each other, but they can see each other and she can hear the music. So this was us singing at her. Also, hilariously, this year… for the SECOND time, Jordan got rid of his iPhone for a Google Pixel just to switch back in less than a month. Just face it, Jordan. You can’t live without FaceTime.

So, Courtney and I got married this year…

Jim sometimes lays on the ground.

Hannah!! I love it when former brides turned friends are at the weddings we’re working!

If you remember last year’s BTS post, all the kiddos love Jim.

Only Tommy (a very talented rock climber) would ever be allowed to do this for a dress shot.

Doing what you’ve got to do for rainy weddings.

We got a photo booth! It’s been so fun to have it at weddings this year. The most amazing part is when kiddos use it and only their heads make it in the frame. The resulting photos are hilarious!

Simey got a ride from Tommy.

Rachel and Joe creeped on Tommy for a change.

I tried to duck out of Tommy’s shot.

Tommy caught me talking with Ryan before his first look with Gaby. One of the things we try to do is to create a present headspace for our couples going into the first look. It’s not about us, it’s about them. Take as long as you want, enjoy the moment, enjoy each other. It’s likely the only quiet time you’ll get together before the day ends… and your last time together with no expectations before you’re married. That’s something special.

It took almost a month, but Courtney and I finally had our first dance.

Like I said before, when you know you’re in the shot, gotta make it count!

Sobbing at Gaby & Ryan’s wedding post-toasts. I could not stop crying that day!

Tommy likes to take unnecessarily close photos of my face.

Also, Olivia’s maternity session was THE. COOLEST. She is such a badass! So psyched for them to be parents so soon!

When the chuppah is up on the stage, people are blocking the view from all sides, including the front, and you want to get photos of something other than butts… your only choice is to get up in it. Holla to Sarah – their videographer – who jumped right in there with me!

I call the remainder of this post – what happens when you realize the year is almost over and we need high quality bts shots.

Jacob! I hadn’t worked with Jacob in years (even though we’re friends!) and it was AWESOME having him bring the party for Andrew and Melissa.

OMG Jim. We died laughing when we saw this photo. Tommy didn’t even realize you were in the window when he got this shot.

A few days into the new year, our beloved JeanBean had her son, Ronan! We’re going to miss you at weddings so much, but I’m so happy to be Auntie Brea to this sweet boy <3

baltimore wedding photographers, behind the scenes, Photography by Brea