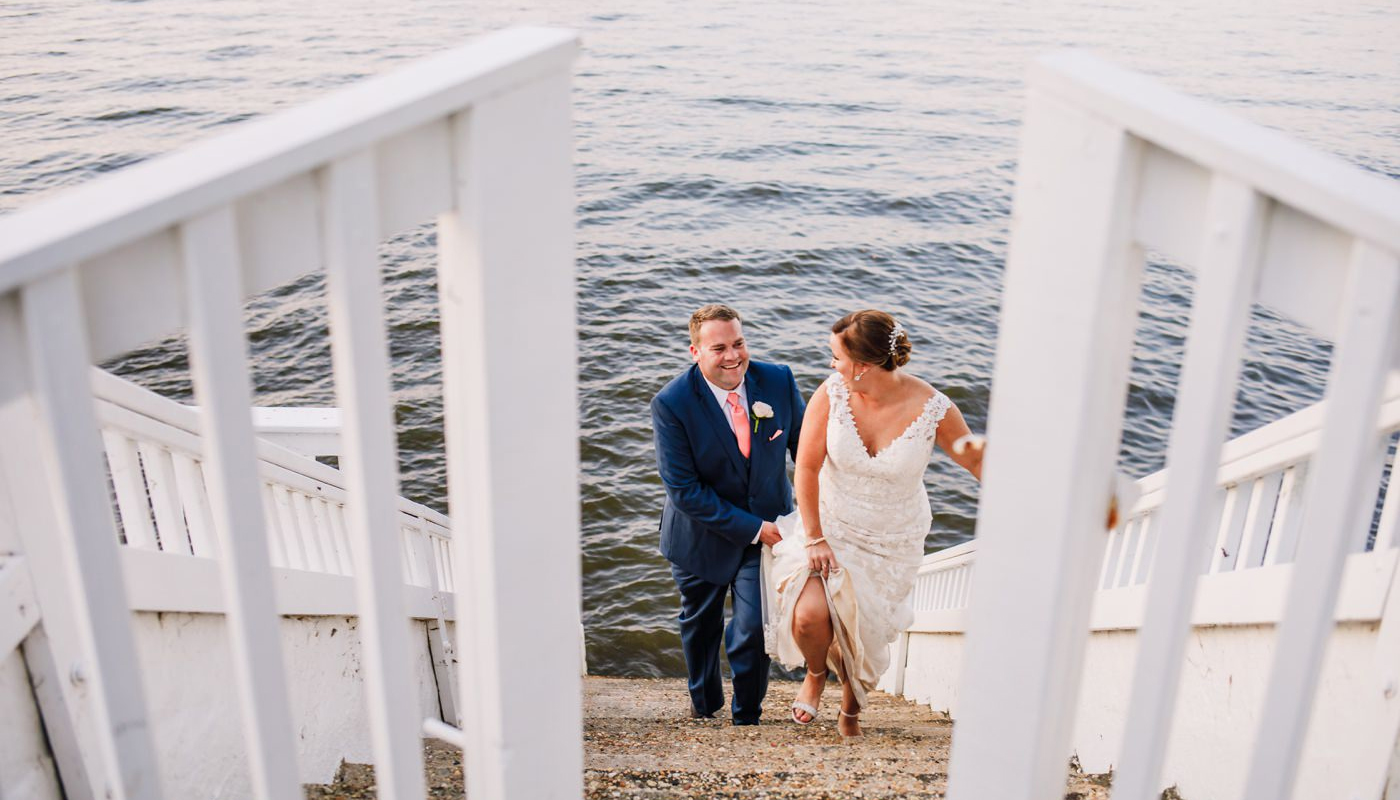 Sarah and Rob’s Celebrations at the Bay wedding this past weekend was absolutely perfect. Beautiful weather (comfortable temps even in mid-August!), an amazing party, and lots of beautiful emotional moments.

“Robbie and I met 5 years ago after my best friend dragged me to play softball with her because her crush was on a social league that needed more girls to play.  We started texting about our mutual love of Mean Girls (later I found out that was how he picked up girls, and that he actually wasn’t obsessed with Mean Girls as much as I thought).  After meeting up in one night in Arlington and showing off my awesome dance moves and karaoke skill, and I swept him off his feet and the rest was history!

“Engagement Story (March 11, 2018)-  Robbie and I planned a trip to Palm Springs, California to visit his grandparents, little did I know that it was going to be much more than a little family reunion.  Robbie’s grandfather suggested we take his Porsche and take a sunrise drive up the Coachella Valley early that Sunday Morning because it was a sight no one can miss!  Now we are definitely not morning people, so I was a little suspicious this was actually going to happen.  Well, that morning Robbie got me up at 5am and rushed me out the door.  We made our trek up the mountain just in time to see the sunrise.  We parked, got out of the car and stood at separate ends gazing at the beautiful views of the Coachella Valley for what seemed like an hour.  Robbie then speaks and says “It’s so beautiful up here that I want to ask you a question”, and I turned around and there he was on one knee with a ring in his hand.  I, of course, said YES!!  Robbie then whipped out my selfie stick and we got some awesome pics of that special moment :)

“I’m a NICU nurse and spent that last 3 years in graduate school, which was very much of a challenge for both of us, but Robbie stuck by me through blood, sweat and tears, and was my biggest supporter.  Robbie loves to sail, fish and take me out on his parent’s boat in Virginia Beach, which is why we decided to get married on the Chesapeake Bay!”

It’s going to be hard to appropriately sum up Sarah and Rob’s wedding day in words (thank goodness there are photos to help with that). Let’s just start with a little story. Early in the day, Sarah asked me if we could add a family photo to the family photo list, and said the photo she wanted to add was “Kinley and her family.” That was when she told me the following story. In 2011, when Sarah was in nursing school, she got involved with an organization that handles bone marrow donor registration and she herself registered as a donor. A year later she found out she was a match. She donated her bone marrow to a complete stranger. All she knew was that it was for a little girl with leukemia. Fast forward several years and the organization said that the family wanted to be put in touch with her. The transplant worked and their daughter was in remission! When Sarah got engaged she knew that she wanted them to be there and invited them to the wedding. The night before the wedding, she met Kinley and her family for the first time. On the wedding day – Kinley was by her side for most of it.

The most striking and moving part of this story is the bond that these two have. Nearly strangers, but intimately connected. And every single person in Sarah’s family embraced Kinley and her family as their own.

That’s how special these people are. The entire day was filled with so much love for Sarah and Robbie. The way their friends talked about them made it incredibly clear, these aren’t the people you spend time with out of habit. They’re the people that enrich your lives and make you a better person. It was truly an honor to be chosen to capture such a wonderful day for two amazing people! Here are a few favorites.

Celebrations at the Bay Wedding Photos

Celebrations at the Bay Wedding Vendors

Sarah and Robbie’s Celebrations at the Bay wedding was photographed by Baltimore wedding photographers Breanna Shaw and Tommy Wagner for Photography by Brea. The entertainment for the wedding was provided by The Bachelor Boys Band and The Áine O’Doherty band for ceremony music. Hair and makeup were provided by Sarah Love and Jami Funk-Wilbanks, respectively. The bride’s Morilee gown was purchased at Global Bridal Gallery. The wedding flowers were by Maher’s Florist.